Home / The Buzz / The right dog food for the three musketeers

The right dog food for the three musketeers 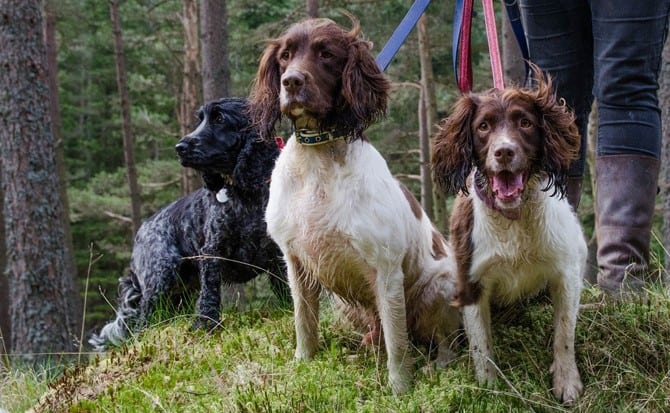 Back in November last year, I made a massive leap out of full time work to run my business (Millie’s Beach Huts) and set up our new venture Millies Pet Services.
Not only did it involve moving 500 miles north back home to Scotland but to help manage some of the risk (and money!), I made the decision to move back in the short term to move back in with my parents.
Great news for Millie as that meant moving in with her brother Harley and another mad spaniel – Isla! The three musketeers were reunited!

But it presented a problem for us.  All three dogs were on different foods and they all had their ‘issues’.  Feeding time was turning into one very large job and it was impossible to stop them trying to eat each other’s food too.

Wouldn’t it be easier if they could all eat the same?  It didn’t feel like it was going to be an easy job due to those ‘issues’!

From a very young age, I’ve had  lots of vet trips with Millie due to a sensitive tummy.  As an excited springer, when she is around water and tennis balls, she would wind herself up so much more and make her senstivie tummy even worse.  It got to a point where I noticed she was continually licking her paws and having discussed at length with our vet, I started our long journey trying to find the ‘right food’ for her. 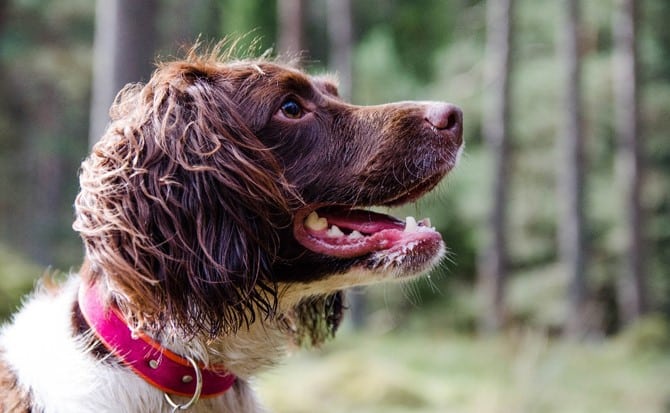 Over two years we gradually worked our way through different dog foods and finally noticed the biggest improvement when we moved to a hypoallergenic dog food and also changed the protein type too (to a predominantly fish based kibble).  So at three years old, I was much happier with the food she was on but did wonder if we could get even more of an improvement.

Harley on the other hand will eat anything and he does try to 24 hours a day! But having previously been overweight, it was really important to us that we could ensure that we keep the weight off.

He’d also had major surgery in January this year following accidental poisoning (I did say he eats everything didn’t I)?

We were now feeling nervous with food choices as the surgery did put a great deal of strain on him. We’d been told his heart stopped at one point during the operation.  He’s a typical boy spaniel but we’re just that little bit more protective of him and what he eats following such intensive surgery. 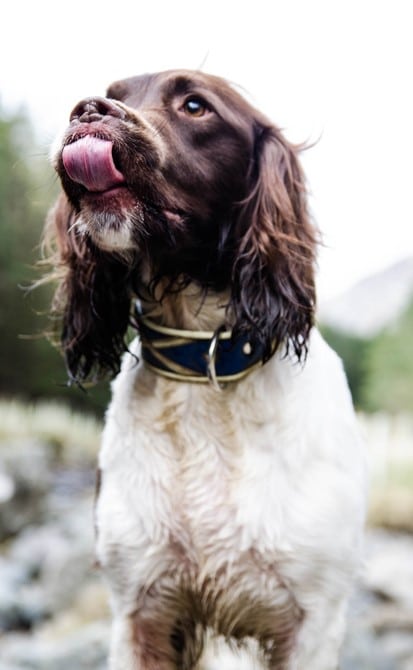 If that wasn’t enough Isla is also a fussy eater!! She’s the youngest of the three and don’t’ tell my mum I said it but well, she’s a little spoiled. I know, how you can be more spoiled that Harley and Millie but well she is ;0)

She will literally turn her nose up at food and would frequently leave it if she felt inclined to that day!  And to top it off, we are trying to help her lose a little weight too. 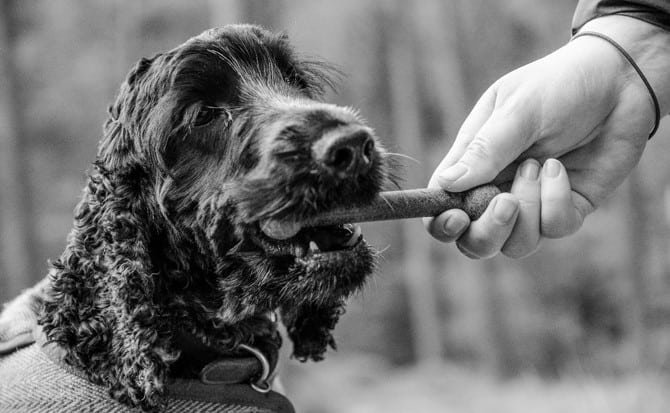 So with that all in mind, it felt like the right time to do something and I took the opportunity to do a LOT of research on dog food at the start of this year (2017).

It took a couple of months of research before we finally made the decision to move to Guru.  If I’m honest, we hovered between raw food options and Guru for most of that time.  However, the more and more we researched, Guru looked like it would be perfect for all three and felt more confident in the health benefits and that Full on Feast would be a good match for Millie’s sensitivities.

We made the switch over in February of this year and given all of the ‘sensitive’ issues above, we’ve very, very, very, VERY gradually transitioned over to 100% Guru.

Three Months On with Guru

Ok it’s time to get dirty and talk dog poo!

Yep, we all know it’s important to when it comes to changing dog food and we couldn’t be happier.  There’s been a marked improvement in poo’s, which I’ve particularly noticed with Harley.  Both colour and firmness improved in the first couple of weeks!!

Isla is eating her food at every meal time and we haven’t had any tummy problems with Millie either!

The one thing I would say, is that if you are making the move over to Guru, do look at the cost to feed per day rather than cost per bag which can be deceptive.  Even though we were previously using higher end dog kibble, the difference in portion size was substantial and we’ve discovered that we are actually spending less.

While our final decision on dog food would never have been based 100% on cost, the fact that we have improved the quality of food for them while not increasing overall costs is an added bonus. Particularly as we have three energetic spaniels to feed! 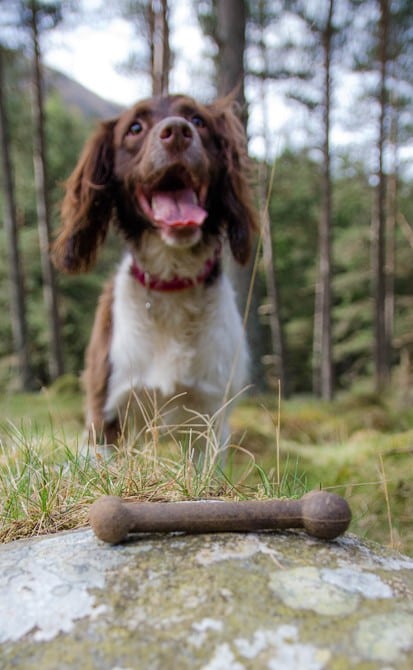 The Icing on the Cake…

An extra added bonus for me was the fab field and trip bones that Guru had to offer. Why?  Well with a sensitive tummy I have to be very, very careful with Millie’s treats.

At the end of March Millie and I set off on another adventure.  We were hitting the road for 3.5 weeks and I was armed with a new delivery of Guru Full on Feast and a mountain of trip and field bones.

With a midweek break planned at the fabulous Brecon Retreat, I was then heading down to Essex.   Millie is the CEO of a beach hut hire company and I had to help her out with renovating and opening four new beach huts for hire over those weeks.  We (ok, maybe just I) would working around the great British weather.   It meant that occasionally it would be extremely early and/or long days or late nights.

While I’d been using the field and trip bones as treats, this is where they come into their own as meal replacement.   I didn’t need to worry about having extra food bowls in the car with me nor squeezing extra food in air tight containers into an already jam packed car. I just carried a bag of trip and field bones using them as and when we needed. Perfect! 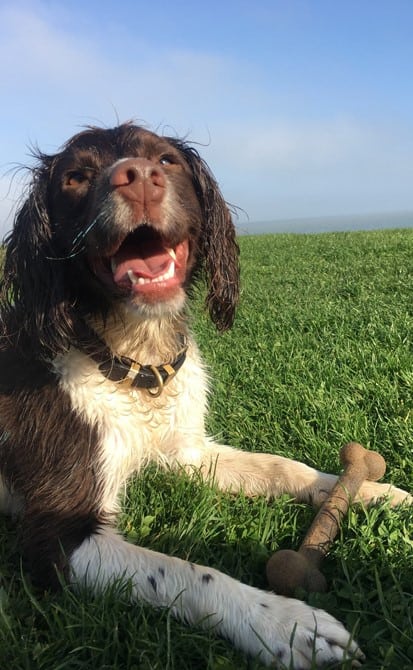 (Millie and I having some time out while working on our beach huts – yep she had as much paint on her as I did on myself! I think she’s laughing at the mess of me, in this one!).

They really were such a lifesaver and meant that Millie still had her own routine for meal times, even though my own routine was a tad chaotic!

Were we nervous about making the switch? Yes of course.  Isn’t every dog owner?

Am I glad we made the switch? Without a doubt and I’m so so pleased that I was able to find something that would work for three very different pooches.

All for one, and one for all!