Home / The Buzz / Only the best for Buster

Only the best for Buster 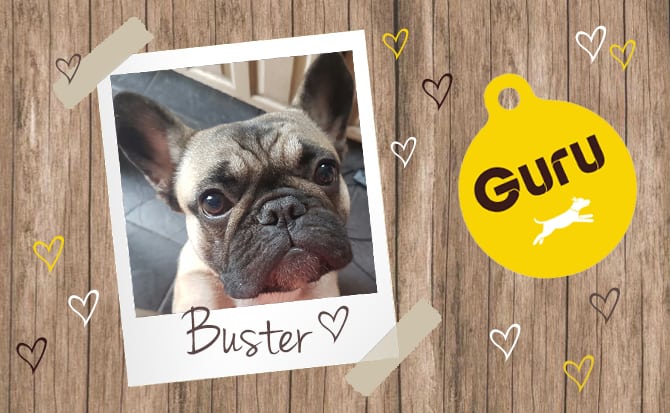 Buster is an adorable one-year-old French Bulldog. He’s very cute and sweet natured, but when his owner, Nicola Smith, first brought him into her home, he did have one considerable downside… a rather sensitive stomach.

Buster was inherited by Nicola at just 7 months old, following the very sad passing of a family member, which left the puppy in need of a new home.

During the period of Buster’s original owner’s illness, several people had looked after him, and during that time he suffered chronic diarrhoea.

On a day-to-day basis, this wasn’t a pleasant thing to deal with – not to mention time consuming to clear up.

With the people looking after him struggling to cope, Buster was welcomed by Nicola who resolved to see what she could do to help him.

It was a bit of a bumpy start. Nicola said: “During the first week of having Buster, whilst he was a really lovely dog, every morning we were met with the messy leftovers of the poor boy’s sensitive stomach. As you can imagine, this isn’t the most pleasant of starts to the day!”

She continued: “At the time and following the vet’s advice, Buster’s diet comprised primarily of James Wellbeloved, which is supposedly hypo-allergenic, and the food that the vet believed would work best to help counteract Buster’s sensitivity.”

Despite the vet’s recommendations though, Buster showed no sign of improvement. So, faced with constantly cleaning up Buster’s mess, Nicola decided to look online for the best solution.

She said: “While researching possible solutions, I came across the concept of Guru’s cold pressed dog food. Reading up on the benefits, it looked like a good option to try and help Buster.”

One of the many positive side effects of cold pressed dog food is that it helps to improve stool quality in dogs. Seeing this, Nicola decided to give it a go.

She commented: “The official feeding advice for Guru is to wean your dog onto cold pressed, by mixing it in gradually over time with your dog’s existing food. So, I took that on board, giving Buster half cold pressed and half his existing food, James Wellbeloved.”

The effect was practically immediate. Overnight Buster’s stools became half solid and half diarrhoea.

With such a profound response after just one feed, Nicola decided that she was just going to go all in with cold pressed and remove the other food entirely from Buster’s diet.

Nicola said: “It’s been amazing. The transformation happened so quickly. I can’t tell you the relief at having to not clean up after Buster every morning! He’s such a beautiful dog and with a wonderful personality, so it’s great to see him better.”

She added: “He still has the odd upset stomach, but this is down to having the occasional treat. When he sticks to cold pressed he has no issues. The people who were looking after him before can’t believe it – he’s like a new dog. I keep telling him they’re not allowed to have him back though!”

Alongside Buster, Nicola also has a Yorkshire Terrier called Buddy who has suffered from skin complaints. Having seen benefits in Buster and with easier feeding in mind, Nicola has taken to feeding Buddy Guru’s cold pressed too. She said: “I have noticed a difference already, with Buddy seeming to scratch much less than usual.”

She added: “Whilst I’ve seen definite improvements, I’m not making a firm judgement just yet. I’ll wait until after the summer for full confirmation, but it’s certainly great to see the improvement so far.”

So would Nicola recommend cold-pressed dog food having seen its effect on Buster?

‘Oh, yes, definitely,” she said. “Buster is so much better since. It’s a relief for me, but I’m sure it’s a real relief for him too!”