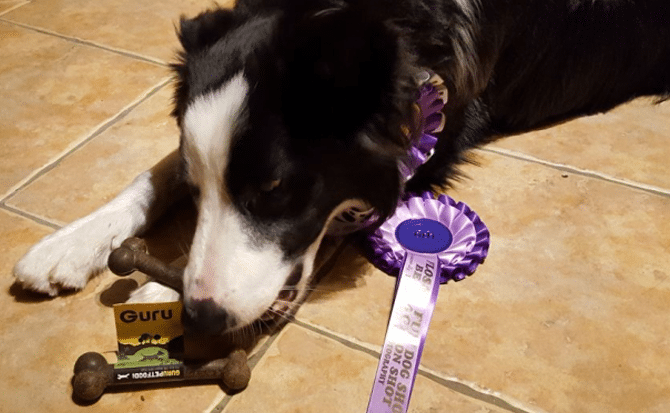 ‘What do you feed your dog?’ is a question everyone seemed to ask us from other dog owners to our vet, family members and friends. Everyone also had their own opinion on the matter! ‘You need to feed him a raw food diet’ one said; ‘He should be on leftovers’; ‘You must feed him grain-free’; ‘You need to feed him xyz brand’. There were just so many choices and it felt like there was a lot of pressure to do the right thing. I believe that there is no set solution, one size does not fit all, both for humans and animals – you should do what is best for your individual dog.

Being ever the bargain hunter, when Kubo came to live with us I looked for sample and trial food packs. I even wrote to companies that we were interested in and asked them if we could try their food so we could establish what food we liked best but also which he preferred.

We were advised on several large brands by our vet and to always go with a food which has a calorie content on the bag. I feed the cats Royal Canin so naturally I thought we would feed the dog the same: it is recommended by vets and I have always got on well with it however, Dave (having too much time on his hands, I think!) became involved in researching different types of food. 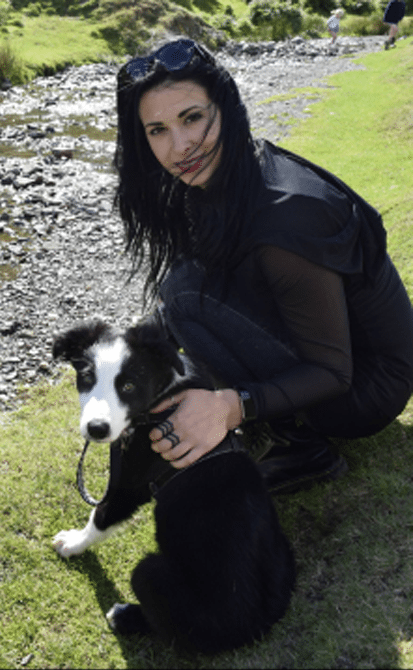 Like every puppy, Kubo was hyperactive and Dave had read somewhere that a high carbohydrate diet can cause excess energy. Apparently high protein content is better so he started researching these and we ended up trying a cold pressed food. Kubo took to it really well and his stools became less frequent. He seemed happy with the change and enjoyed his dinner even more. Whether it was the food or just time passing, his energy levels did seem to settle somewhat also.

I had no idea what cold pressed food was though! I hadn’t even heard of it before. A bit of reading later, I discovered that cold pressing is a relatively recent new method of creating dog food; ingredients are ground, mixed together and then pressed at a low temperature. This keeps more of the essential nutrients resulting in a more ‘natural’ product. Nutrients are also released slower, dissolving from the outside, which can help to avoid bloating.

We were feeding him Orijen which we were getting on well with until December’s Barky Box delivery. I wrote a blog post about it here: I have never seen Kubo so intent to get into the box and it was all for a Trip Bone by the dog food company Guru. He is very food orientated normally but to be this interested in something must mean it was amazing!

I instantly fell in love with Guru, their people and ethos after reading their website. The next food delivery was 2 big bags of their Surf & Turf food, not to mention some more Trip Bones and tasty Venison Sausages. Apparently, according to Kubo, the Venison Sausages are the absolute best treat ever. I am surprised by some of the ingredients some companies put in food and treats but I am happy in the knowledge that these sausages have the best ingredients in them and Kubo will listen to us more than he ever had for even one of these! 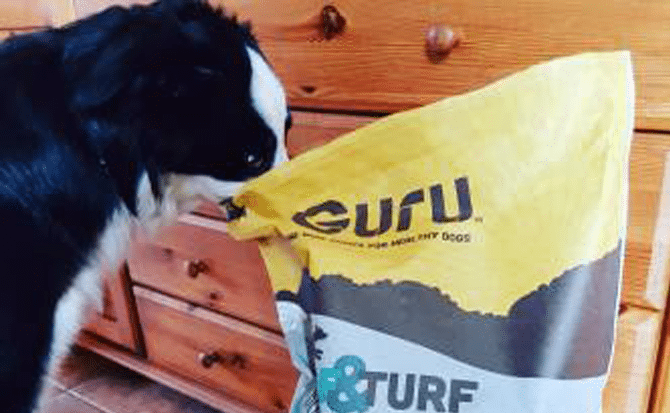 His love of Trip Bones had not waned either! He loves them just as much as the first one he gobbled and will try to sneak into the cupboard to pinch one if we let our guard down! They’re a brilliant treat for him and they do keep him quiet for 10 minutes or so.

But what about the food? Well, according to the feeding instruction, Kubo needed less than he would have had of other kinds of dry food and he seemed slightly unimpressed by this. Not that this made him hesitate – he wolfed down his first bowl straightaway! I am convinced that his stomach was full for longer though and despite having less food, he had definitely had enough. I gave him a choice of foods for his next meal, his nose went straight into the Guru bowl! Proof is in the pudding there! 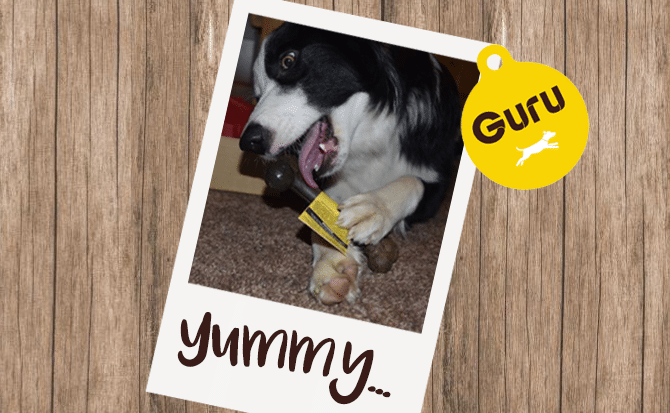 At the end of the day, the food we buy will be what is best for, and preferred by our dog but I will always have a soft spot for start-up companies, specifically UK-based ones! I think connecting with a company is important and I also highly value great customer service, good interaction with customers, and values that I can associate with – all of this I have found in Guru.

Honestly, I like the convenience of healthy dry dog food – it doesn’t smell like wet food does, it is not messy and it doesn’t take lots of preparation like raw food – but there was always a worry that dry food wouldn’t be the best thing for our dog so I was willing to explore options. Switching to cold pressed food though has been a positive experience for us; Kubo’s stools have smelt less and are better formed (win for the humans as the picker-uppers!) Doggy breath has also been much better and his energy really is more focused – it is not so ‘mad’! I like that we can feed him less whilst knowing that he is still getting the right amount of food so we do save a bit of money … this does just mean he ends up having more spent on treats and toys though! Despite all of the positives that I can think of with cold pressed food, my number one favorite thing is how much Kubo loves it. More important than anything is the happiness, welfare and wagging tail of our dog. Guru has ticked all of the boxes – we are absolutely proud to now be ‘Geeksters’!

Check out more of kubo and his adventures on:
Instagram – @kubo_bordercollie
Blog – Good boy Kubo